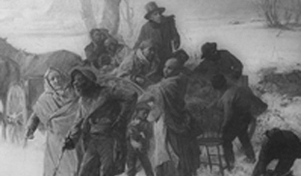 As a descendent of travelers on the Underground Railroad, I grew up fascinated by what the “Griot” of my family told me. My Aunt Stella, the storyteller of our family, was termed the “Griot,” an African word for “keeper of the oral history.” She passed away in 1986 at 102 years of age, but her mind was sharp until the end of her life. Aunt Stella told me that John Freeman Walls was born in 1813 in Rockingham County, North Carolina and traveled on the Underground Railroad to Maidstone, Ontario, Canada in 1846. His father Hannabal told him, “If you remember nothing else that I tell you, John, remember ‘the side of the tree that the moss grows on and the light of the North Star is the way to Canada and freedom, like my native Africa.’” I learned terms related to the Underground Railroad and came to understand that it was an informal network of safe houses and escape routes.

The Underground Railroad is considered by many to be the first great freedom movement in the Americas and the first time that people of different races and faiths worked together in harmony for freedom and justice.  However, because it was such a secretive organization and people were risking their lives for freedom, codes were used. Escaped slaves and those who assisted them needed to have quick thinking and an abundance of wisdom and knowledge. The Underground Railroad became such an effective organization that there are still people today who think there was an actual train running underground from the south to the north, carrying people to freedom. The peak time for the Underground Railroad Freedom Movement was between 1820 and 1865. The term “Underground Railroad” is said to have arisen from an incident that took place in 1831.
Legend has it that a Kentucky runaway slave by the name of Tice Davids swam across the Ohio  River with slave catchers, including his old master, in hot pursuit.  After they reached the other side near the town of Ripley, Ohio (a busy “station” on the Underground Railroad) Tice eluded capture. He was probably aided by good people who were against slavery and wanted the practice ended. These freedom sympathizers were known as “abolitionists.” The angry slave owner was heard to say, “He must have gone off on an underground railroad.”

The need for secrecy was paramount as there were severe penalties for slaves and those who helped them to freedom. Therefore, railroad terminology was used to maintain secrecy and confuse the slave catchers.

The code words often used on the Underground Railroad were: “tracks” (routes fixed by abolitionist sympathizers); “stations” or “depots” (hiding places); “conductors” (guides on the Underground Railroad); “agents” (sympathizers who helped the slaves connect to the Railroad); “station masters” (those who hid slaves in their homes); “passengers,” “cargo,” “fleece,” or “freight” (escaped slaves); “tickets” (indicated that slaves were traveling on the Railroad); “stockholders” (financial supporters who donated to the Railroad); “Freedom Trails” (the routes of the Railroad); “terminal,” “heaven,” or “Promised Land” (Canada and the northern free states); and “the drinking gourd” (the Big Dipper constellation—a star in this constellation pointed to the North Star, located on the end of the Little Dipper’s handle).

The enslaved came from Africa with centuries-old knowledge of the stars; although the constellations can shift, the North Star remains still in the night sky. Thus, the escaped slaves would run through the woods at night and often hide by day. They would thirst for freedom so much that at times they would kneel down and drink rainwater from the hoof-prints of cattle. They did this in order to quench their thirst for freedom and continue along the perilous Underground Railroad to the heaven they sang about in their songs—namely the northern United States and Canada. The freedom seekers realized that as long as that beacon of freedom in the night sky stayed stationary as they traveled, they were on course; if the North Star drifted, their course had changed. Although the enslaved were not allowed an education, they were intelligent individuals. They learned that the moss always grows on the north side of the tree. Maps made by former slaves, White abolitionists, and free Blacks would provide the freedom seekers with directions and geographical landmarks when travel was possible by day.

There were four main routes that the enslaved could follow: North along the Mississippi and Ohio rivers to the northern United States and Canada; South to Florida and refuge with the Seminole Indians and to the Bahamas; West along the Gulf of Mexico and into Mexico; and East along the seaboard into Canada. The routes were often not in straight lines; they zigzagged in open spaces to mix their scent and throw off the bloodhounds. Sometimes they would even double back on their routes in order to confuse the slave catchers.

The enslaved could not carry a lot of supplies as that would slow them down. The conductors in the safe houses could provide meals, a bath, clothes, and shelter; however, in the woods and wilderness, the runaway enslaved had to hunt, forage, and use creative means to find food and sustenance. Along the Underground Railroad journey, the enslaved used available plant life for food and healing. Knowledge of plant-based herbal remedies that had been learned in Africa and on the plantations had to at times be applied. The enslaved learned that Echinacea stimulates the immune system; mint combats indigestion; teas can be made from roots; and poultices can be made from plants even in the winter when they’re dormant.
Word of mouth, codes in newspapers and letters, bulletins, storytelling, and song contributed to helping the desperate travelers cross the 49th parallel to the “Canaan land” of Canada. They would learn that despite what their owners may have told them, the Detroit River was not 5,000 miles wide and the crows in Canada would not peck their eyes out. ?Song lyrics like, “Swing low sweet chariot, coming fore to carry me home,” informed the escaping traveler on the Underground Railroad that it was time to leave the South. These lyrics, hopefully for the Freedom Seeker, would give way to lyrics from the “Song of the Fugitive:”

I’m on my way to Canada a freeman’s right to share; the cruel wrongs of slavery I can no longer bear; my heart is crushed within me, so while I remain a slave I am resolved to strike a blow for freedom or the grave. -- I now embark for yonder shore sweet land of liberty; our vessel soon will bear me o’er and I shall than be free. No more I’ll dread the auctioneer, nor fear the Master’s frowns; No more I’ll tremble least I hear the baying of the hounds. O, Old Master, ‘tis vain to follow me; I’m just in sight of Canada where the panting slave is free.

All those courageous individuals involved in the Underground Railroad Freedom Movement had to learn new terminology and codes. It required great skill and knowledge to reach the Promised Land. 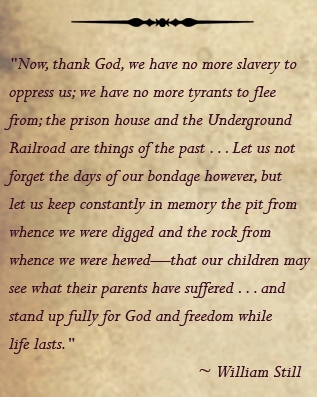 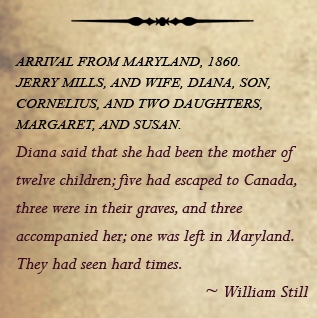 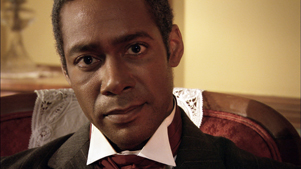