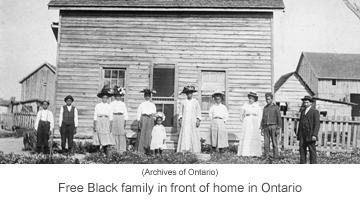 After the War of 1812, American officers who had been stationed near Fort Malden (Amherstburg, Ontario) carried back to the United States stories of a country where runaway slaves were welcome. As a result, great numbers of enslaved freedom seekers made their way to Amherstburg. The famous abolitionist Levi Coffin, during a tour of Upper Canada in 1844, described Amherstburg as the principal terminal settlement in Canada of the Underground Railroad. Ferry, later to be called Windsor and Sandwich Township, also became the first sanctuary for many of the first, large wave of fugitives to Upper Canada between 1817 and 1822. Refugees trying to find farming land and creative and honest ways to make a living in this strange new land migrated to the various villages, townships, and towns of Essex and Kent County. They established terminal settlements in places like Anderdon, Marble Village, Union, Gambia, Haiti Village, Brion, Dawn, Elgin, Dresden, Shrewsbury, Puce, Elmstead, Little River, Gosfield, Gesto, Gilgal, New Canaan, the Matthew Settlement, Edgar, Mt. Pleasant, Rochester, Harrow, and the Refugee Home Society Settlement. This settlement is now part of the John Freeman Walls Historic Site and Underground Railroad Museum and is on land where my family and I reside today. This settlement was a place of hope for a better life, a common desire shared by Underground Railroad travelers in settlements throughout Canada.

My ancestors purchased land from the Refugee Home Society at the Puce River settlement. There was woodland and trees on all sides in the mid-19th century. Henry Bibb, founder of the “Voice of the Fugitive” newspaper, proposed the Refugee Home Society Settlement land scheme, supported by the American Missionary Association. Lots were purchased and resold to refugees on easy terms. The settlement was located 20 miles from Windsor, which gave added peace of mind to the settlers as the distance from the border helped to discourage bounty hunters. John and Jane Walls had concerns for their own safety and that of their children. They had fled from Rockingham County, North Carolina to Canada in order to live in harmony as husband and wife. The truth of their story was stranger than fiction. In 1861, after a conversation with John Freeman Walls, George Whipple, an American Missionary Association minister wrote:

“Tuesday I returned to little River riding in a little cart drawn by a small French pony, guided by a Christian gentleman but not of this church. He is a Baptist, his story is a little peculiar. He is a very black man and was a slave in one of the southern states. After the death of his old master, his mistress came north with her children, bringing this man with her; at length, she married him and the whole family are now living happily together in Canada. He owns a little farm and is out of debt. There is an excellent school at Little River taught by a student from Oberlin, a Mr. Wheeler. He might get a more advanced school and much better wages elsewhere but is drawn here by his sympathy for an oppressed people.”

There were 60 families living in the settlement by 1861, enough to support a school and three churches (African Methodist Episcopal Zion, British Methodist Episcopal, and Baptist). The Refugee Home Society did not reach the goals of the original founders, as many policies and decisions were flawed. However, its success can be measured by the fact that many families continue to live there today in harmony with their neighbors, and several have roads named after them, such as “Walls Road.”

“Before the middle of 19th Century small Black communities were firmly rooted in six areas of Canada West: along the Detroit frontier, that is at Windsor, Sandwich, Amherstburg and their environs; in Chatham and its surrounding area, where the all- Black settlements of Dawn and Elgin were established; in what was then the central section of the province particularly London, the Queen’s Bush, Brantford, and the Black settlement of Wilberforce (now Lucan); along the Niagara Peninsula at St. Catharines, Niagara Falls, Newark (Niagara on the Lake)and Fort Erie; in the larger urban centres on Lake Ontario, that is Hamilton and Toronto; at the northern perimeter of Simcoe and Grey Counties, especially in Oro, Collingwood and Owen Sound. Besides these centres of Black population, small clusters of Blacks as well as individual Black Families were settled throughout Canada West.”

The Elgin Settlement / The Buxton Mission

One of the most successful Canadian settlements is at Buxton. The Elgin Settlement, which includes the Buxton Mission, was founded by Reverend William King, a Presbyterian Minister. On the death of his father-in-law, King inherited 14 slaves; he added another and then came north and freed them all in Ohio. King was determined to set up a refuge for Blacks entering Canada. Despite the objections of Edwin Larwill, a White extremist, and other supporters, King started the Elgin Settlement with his 15 slaves from Ohio on November 28, 1849. The Elgin Association took care of secular business, and the Buxton Mission Fund supported by the Presbyterian Church took care of the community school, chapel, and Christian work. New settlers purchased 2,000 acre lots of the 360,000 acres of land in Raleigh Township. The spirit of the community was growing stronger and the settlers were eager to work for what they received. In 1850, a church and school building were built along with a post office. By 1853, there were 130 families.

The settlers at Elgin placed a high value on education and their Buxton Mission School was better by far than the government schools. Prominent businessmen from Toronto and Buffalo sent their children to the school, and half of the students in the formerly Black school were White. All were attracted by the high quality of education. The students often taught their parents, as they too were eager to taste the added freedom that education can bring. As the settlement grew and prospered, the settlers overcame the opposition and prejudice of their White neighbours. Because of education and their vote, a friend of the Elgin settlers, Archibald McKellar, easily defeated the trouble-maker Larwill as Kent County’s Member of Parliament in 1856.

Education, hard work, and creativity were key then as they are today to secure freedom from slavery. Modern-day enslavers such as drugs, hatred, poor self esteem, and violence are only a few of the threats that can take freedom away today. 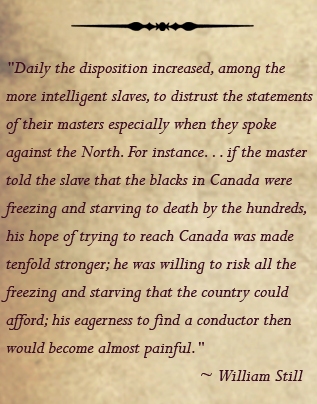 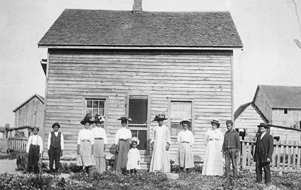 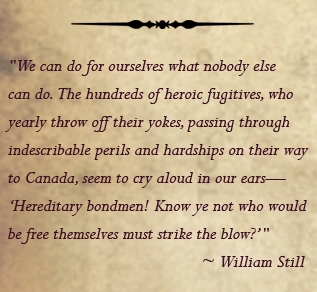 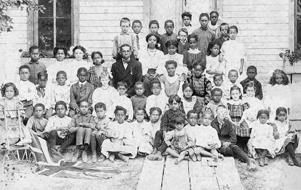