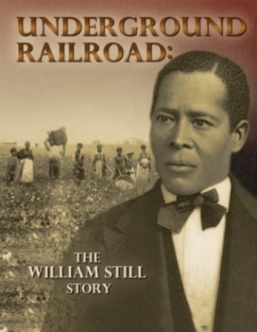 The Underground Railroad remains the most immense humanitarian enterprise of the 19th century--perhaps ever. Underground Railroad: The William Still Story blends stories, characters and context with evocative reenactments, new historical perspectives and sometimes shocking, often touching, accounts from the day. The predominant "voices" in the documentary are those of William Still and a selection of freedom seekers whose stories help define the era. Their actual words are often used, taken from letters and memoirs.

William Still was chairman of the Philadelphia Vigilance Committee, a secretive organization that offered runaway slaves desperately-needed assistance.  Still was among the most significant figures in the abolition of slavery.  His passion for the cause of freedom was so great that when he died in 1902, the New York Times called him “The Father of the Underground Railroad.”

The Underground Railroad, a complex network of freed slaves, white abolitionists, sympathizers and safe houses that stretched from Philadelphia to what is now southern Ontario, delivered and estimated 40,000 men, women and children from bondage, but the true number will never be known.  This documentary follows only a few of these courageous figures, but it points to the vastness of the supporting cast.  These are the real heroes—extraordinary people operating in a world turned upside down.   And while the Underground Railroad played a pivotal role in America’s history, much of its success is due to another country—Canada.  Under the protection of the British, Canada provided sanctuary for fugitive slaves at a time when bounty hunters could legally abduct former slaves living in the so-called free Northern States.  That is why Canada was called “Freedom’s Land” and why William Still was determined to help as many runaways possible cross the border.

Still carefully interviewed fugitive slaves who came to him for help, recording where they came from, the names of family members and how they escaped.

The story of the Underground Railroad has been hidden beneath 150 years of myth and legend. William Still's writings reveal an elaborate organization of safe houses in cities like Syracuse, Cincinnati, Rochester and Buffalo that helped move freedom seekers to the safety of Canada. His book is regarded as the most authentic account of some of America’s most heroic stories. It was an extraordinary risk to keep such records, risking his own freedom to be able to tell the stories of those who had the courage to run.

While there is no denying the contribution of white abolitionists, particularly Quakers, the evidence shows that in an overwhelming number of cases the “conductors” operating these safe houses were themselves former slaves, or the children of former slaves. African-Americans like William Still.